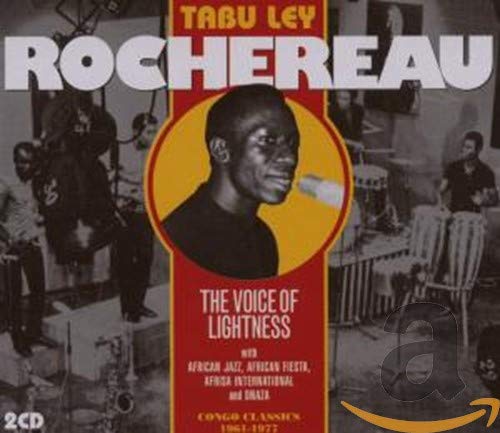 Deluxe boxed set containing 29 tracks on 2 CDs (2« hours of great music) and a 44-page booklet with notes in English and French, band personnel and rare photos.

Over the years of the CD-era, the great, classic music of African powerhouses Congo (formerly Zaire), Mali and Guinea have appeared on scads of reissue compilations. Most of these releases are now out of print - a pity, of course but the truth is, however voluminous, these offerings fell short of the mark. Lacking explanatory notes, personnel data, even dates in some cases, these were mostly products aimed at inveterate fans who needed little help or guidance. Now, at last, Stern's Africa has begun releasing compilations from Afropop's 'golden age' that can stand the test of time. Typically, these are 2-CD sets, packaged with generous booklets (in French and English) that summarize the music, dates, personnel, and personalities, as well as the stories behind the important hits. These compilations allow the curious listener to trace the early career moves of major contemporary artists, including Salif Keita, Mory Kante, Djelimady Tounkara, Sekou Bembeya Diabate, and Congolese vocal legend Tabu Ley Rochereau. lt;Pgt; The Tabu Ley set is especially satisfying. Ken Braun's fine essay hits the nail on the head, cleanly decoding the complexities of band transitions - Tabu Ley sang in six different formations between 1961-77! - while keeping the focus on this remarkable and visionary vocalist. Tabu Ley was decidedly a modernizer, the first Congolese singer to use a trap drum kit, to develop a choreographed stage show, and to perform at Paris's prestigious Oympia Theatre (1970). These 29 tracks are selected from hundreds Tabu Ley recorded during his first 16 years. As Braun points out, Tabu Ley's penchant for modernity sometimes led him in unfortunate directions, particularly after this period. The work this singer is best known for internationally is a mixed bag. This well chosen selection is a pot of gold by comparison, and really clarifies exactly why he remains such a towering figure in Congo music. lt;Pgt; From his first hit, 'Keyla' (heard here in a 1962 remake of the '61 original), it is clear that Tabu Ley has a superbly expressive, and uniquely sweet voice. With the spare backing of African Jazz - featuring electric guitar legend Dr. Nico and a young saxophonist named Manu Dibango - a young upstart croons like an angel. Another establishing track, 'Succès African Jazz' evokes the swooning optimism of independence in Kinshasa. It's a voice so great, he could be singing a soap ad - as he in fact does on 'Savon Omo' - and sound hip. The guitarists here are something of who's who of early Congo electric guitar playing, and since they are all identified, one can begin to appreciated the distinction between Nico's lyricism and hypnotic staccato riffs, and for example, the rocking boisterousness of Manuaku Waku. lt;Pgt; Over time, the bands beef up, through various manifestations of African Fiesta and Afrisa, and - a rarity here - three 1977 tracks recorded with a kind of supergroup at the FESTAC festival in Lagos. Here Tabu Ley joins members of Zaiko Langa Langa (including Manuaku) in Onaza, a group created especially for that occasion. Tabu Ley's many career moves may seem frenetic in retrospect, but they reflect the chaotic milieu of early Congolese pop. They also reflect the singer's supreme self-confidence. As long as he possessed the voice heard on these tracks, he could pretty much pick his backing band. More than any prior Tabu Ley retrospective, this release delivers the man, his story, and his art at its peak of originality and finesse. --Banning Eyre, Afropop.org

The City That Endures

Emma Raducanu's US Open Win Showed the Future of Tennis

Emma Raducanu's improbable U.S. Open title run shows that in a time of transition, women's tennis is in good hands

Inspiration4: The Quest to Push the Limits of Space Travel

Inspiration4: The Quest to Push the Limits of Space Travel

Conversations that shape tomorrow
Get Digital Access every day. All year long.

Sign up for Inside TIME. Be the first to see the new cover of TIME and get our most compelling stories delivered straight to your inbox.

For your security, we've sent a confirmation email to the address you entered. Click the link to confirm your subscription and begin receiving our newsletters. If you don't get the confirmation within 10 minutes, please check your spam folder.

Black Lives Matter and Beyond